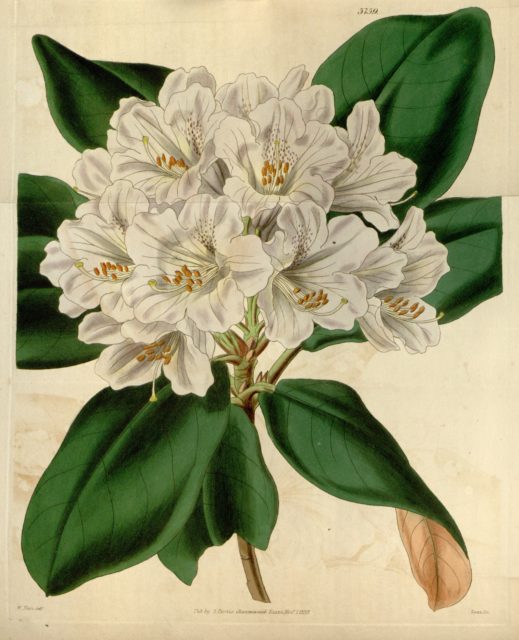 Whilst I have been working on digitizing the Rhododendron monographs I have also been providing some technical help for Stuart Lindsay who is producing a series of fact sheets for the Ferns of Thailand. This has helped crystallize my thoughts regarding monographs and how we migrate them into the digital age.

This post is a follow on from a previous one where I discuss mapping the Rhododendron monographs to EoL. It is an opinionated rant but I offer it in the hope that it will be of some use.

When monographs/floras/faunas are mentioned in the context of digitization people usually chirp up with PDF or, if they are more clued up on biodiversity informatics,  TaXMLit and INOTAXA (Hi to Anna if you are reading) or TaxonX and Plazi.org (Hi to Donat).  The point I am going to make in this blog post is not against these ways of marking up taxonomic literature but more the nature of the monographic/floristic/faunistic taxonomic product itself. I am far more familiar with the botanical side of things so apologies to zoologists in advance.

The problem is what I call the “narrative form” of monographic data not whether it is available in print, pdf, ebook or lovingly marked up XML. These publications are arranged hierarchically. There is introductory material, family descriptions, generic descriptions, species descriptions, subspecies descriptions. These descriptions are nested within each other and it isn’t always clear what information in one level of the hierarchy is repeated at lower levels. Descriptions are diagnostic within the frame of reference of that treatment i.e. they provided enough detail to separate that taxon from the others at that level in that particular hierarchy. Differentiating the taxon from other taxa in other treatments of the same or overlapping groups is usually relegated to notes.

Today we talk of monographs having this form because they reflect phylogeny. Previously they reflected a more ill-defined ‘affinity’ or natural ordering. Originally hierarchies were used as an aide-mémoire. This results in a mishmash of  concepts that it is difficult to decode. Phylogenies do not have ranks or a linear order yet monographs do. So what does the order and rank in a phylogenetically based monograph represent? If these things exist as aide-mémoire then why aren’t they totally arbitrary – merely picking out the most easy to remember characteristics of different groups and making no attempt to represent evolutionary history.

Imagine approaching a monograph/flora/fauna with a species name. You look it up in the index. Turn to the right page and then have to assemble a description of the taxon by reading back up the taxonomic hierarchy – unless of course the author has redundantly repeated all the descriptive data in the species level account which begs the question of what the higher level accounts are for.

Now suppose you have in your hand an unknown specimen. First thing you need to do is to know the family and possibly the genus so you can find the right work to look it up in. There is rarely a multi access approach to getting you near to a taxon such as “deciduous trees with palmate leaves”. You have to be a taxonomist, have fertile material and more or less know what the thing is before you even start. By definition the monographs are not optimized for identification of specimens.

This means that these works are mainly of use to taxonomists who are familiar with the groups concerned. But what do they use them for?

If a taxonomist is working on a new revision they won’t be consulting current, extant monographs very much. That work has been done and shouldn’t need revising for decades. They will be working on material that hasn’t been monographed for decades if ever and needs to be classified. If they are finding new species within a recently monographed group then they will be turning over the apple cart because the descriptions in that monograph are now out of date because the monographic form is designed to be comprehensive.

What is more likely is that a taxonomist will use existing monographs to produce secondary taxonomic products such as field guides – and this is where my key point comes in.

Suppose you want to produce a secondary taxonomic product. Say a guide to the lowland trees of a country. Even if you had a checklist of all the species of the country how would you know which were lowland trees? That kind of habit character is likely to be buried in descriptions. Even if you had your list of the species how would you build your guide? How would you pull together free standing descriptions of each taxon? The only way at the moment is to roll your sleeves up an become a taxonomist. Start writing new descriptions based on the contents of monographs (in which the descriptions are designed to differentiate your target taxa from taxa that will not be included in your guide). This kind of thing should really be done automatically. We should be able to do a search for all the species that are considered trees and occur below a certain altitude and find free standing descriptions of these species that we can load on our phone or tablet or print in a booklet and take into the field. The stuff that taxonomists currently produce does not support this kind of behaviour.

What about putting the monograph on the web? If someone links to a species what do we show on the page that is displayed? Do we include the genus description as well? What if the species description doesn’t mention the generic characteristics? Do we include the subspecific taxa? What if the subspecific taxon is only defined in terms of its minor differences to the main species – “var. alba”

Two years ago I discussed how difficult it is was to handle hierarchies in Synonyms Are SubClasses And Higher Taxa Are Just Tags which is a little more technical than this piece but makes similar points.

Producing electronic versions of narrative monographic works is OK  from a political point of view and, if you are doing a print copy you may as well do an ebook and pdf but from the point of view of a non-taxonomist it is of little value and we shouldn’t kid ourselves that we are increasing accessibility very much. It may even be counter productive because people think they have produced an electronic resource when all they have produced is a facsimile of the paper one that is probably slower to use.

Taxonomy needs to move to a One Species Per Publication model – I call this a fact sheet based approach. Instead of producing monographs of groups taxonomists should produce single free standing publications, one per single species with a global scope. If their primary interest is in phylogeny then they produce separate papers that only discuss the relationships between species that are already described in the free standing publications. This approach is far more appropriate for this digital age for the following reasons:

This is a long post so to summarize my proposal

I am sure this will put a lot of peoples backs up. Please leave a comment if you agree and well as if you want to see my lynched.